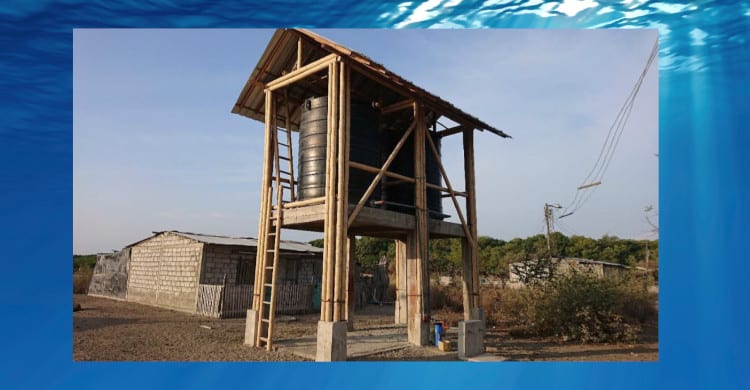 SubCtech has funded a drinking water supply in a remote region in Ecuador from last year’s profit. This helped a lonely village a lot, that previously only had brackish water and salt water for washing and cooking. The resulting lack for the children was a problem.

The volunteers Jakob and Max took over the project. Since they had been in Ecuador for almost a year, they know the region very well and were able to start the project quickly.

Together with the community members, 2 tanks, each with a volume of 10,000 L, were procured, transported and installed on site. A roof was installed above to protect the tanks from sun and rain. Bamboo was chosen for the substructure of the roof, as there was very good experience with this building material from other projects. Freddy, a builder who specializes in bamboo constructions, helped on the spot. This allowed the parishioners to learn how to use this building material professionally. In order to distribute the water to the households afterwards, taps have already been installed. One of them is directly below the tank and the other in the middle of the village.

In October 2019, the first tank filling was brought to Puerto Bellavista by a tanker and since then more than 400 water canisters have been distributed to households.

The business model stipulates that each use costs a small amount to ensure long-term operation.